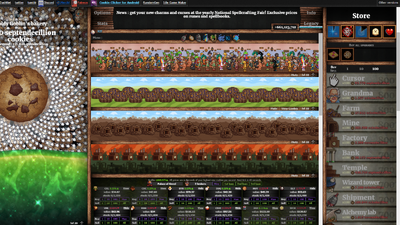 Cookie Clicker is an incremental web-browser game developed by Orteil. The goal of the game is to produce as many cookies (by clicking on the Big Cookie and buying buildings to produce them) as you can. There is no end to the game, but some believe getting all the achievements is technically...

I've been hearing quite a bit about this game lately, and so I was curious to try it out! After a while of playing it, I decided to share my thoughts about this! Of course, I'm going to look through different parts of it!

You click the big Cookie on the screen to get more cookies, you keep clicking on it so you can spend them on stuff that can help you make even more cookies. Your goal is to get as much Cookies as possible! It's a pretty simple concept, but also decently enjoyable to do! Though I personally got bored after a while of playing it and wanted to avoid addiction, so I eventually just used the "saysopensesame" cheat and multiplied my cookies by 1,000 over and over until I finally got infinite Cookies! Normally, I would feel bad for cheating in a game, but the gameplay was basic enough that I didn't really feel any guilt for doing it. Though it was still fun enough that a played for a little while longer at least until IT happened!!! What happened to me that got me to quit playing you may ask? Well, I'll get to THAT later... : /

The music overall is pretty enjoyable! It fits the mood for the game pretty well and It's nice knowing it's made by C418, the creator of Minecraft's music! Though it's worth mentioning that I played the online verion of Cookie Clicker, so it didn't have any music playing.

While I wished the graphics where better as they look a little underwhelming to me, I think it's fine for the most part since it was never meant to be a super complex game to begin with. I'm guessing that the graphics might possibly be inspired from Minecraft's pixely art style design? IDK. As for the animations, again, Cookie Clicker isn't a very complex game, so I think it's fine being simplistic.

Despite having a simplistic gameplay, it actually kind of has a story going for it. TBH though, the "story" is very whack and leaves me with a bunch of questions... like, why is there a giant Cookie that makes more cookies whenever you poke it? Why does anyone actually WANT to make such a ridiculous number of cookies to begin with? Why are there literal farms AND MINES that produce cookies? Where on earth does this "Milk" come from? And why on earth is the game still saying that I have infinite cookies when I started over my game while also not being able to purchase any upgrades that cost way less than that?!? |: /

Seriously! Is this a glitch or something? And remember when I said that I'd eventually mention what caused me to stop playing this game earlier ago? Well, this is it! This "glitch" is what bore me to death in to wanting to quit playing the game!!!

But critically speaking, I think it's a pretty good game overall, and to anyone who enjoys playing games that are simple but also whacky and weird, I'd recommend trying this game out (If you haven't played it already that is!)

I'm new to Cookie Clicker and haven't played it yet. Is it worth trying out? I admit it looks kind of interesting.

Are sugar lumps useless or helpful because I have 14k of them and I don't know what to do with them. 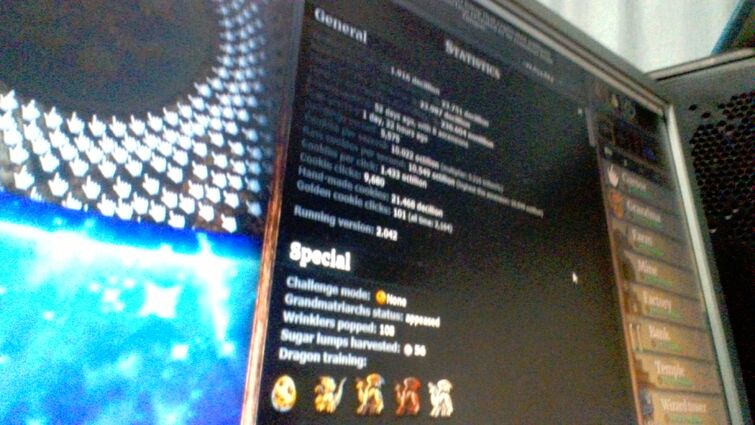 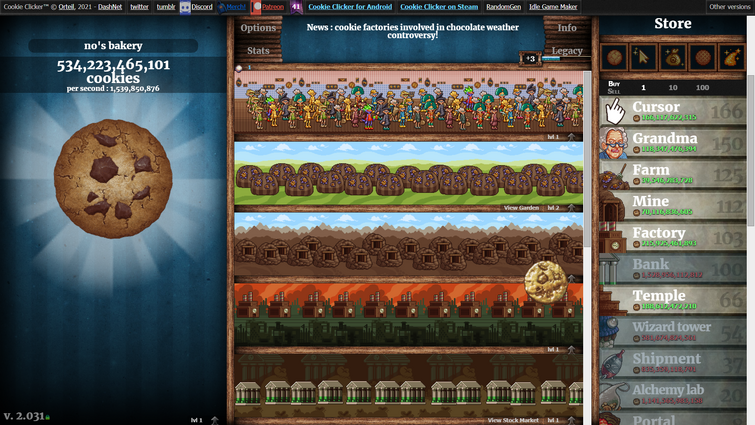 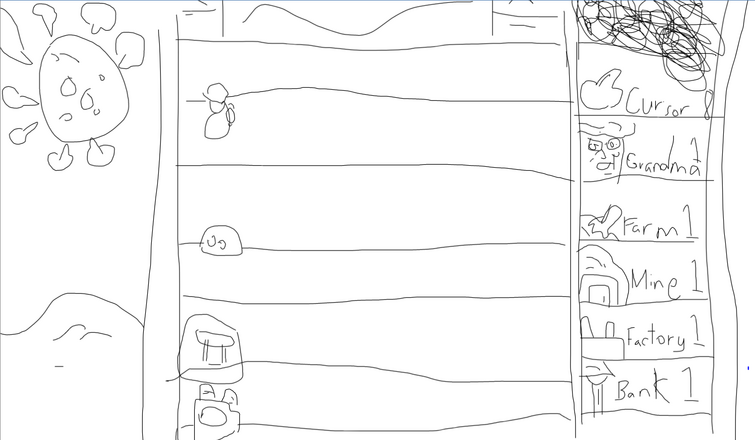 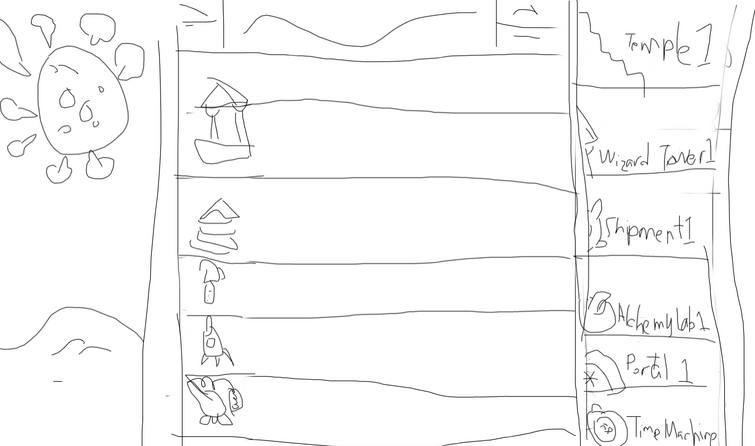 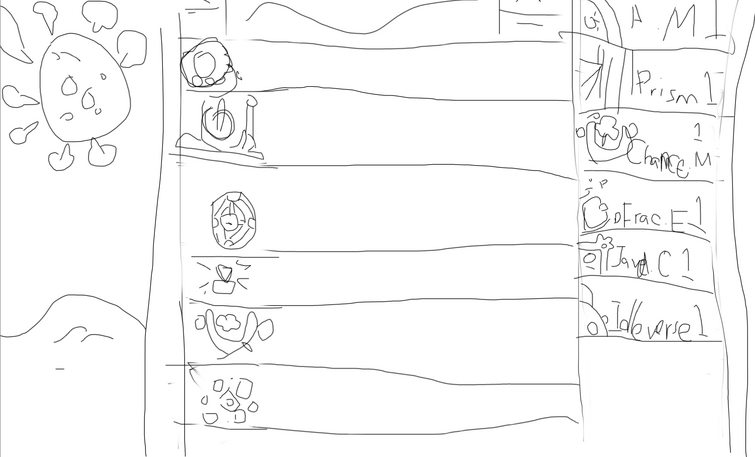 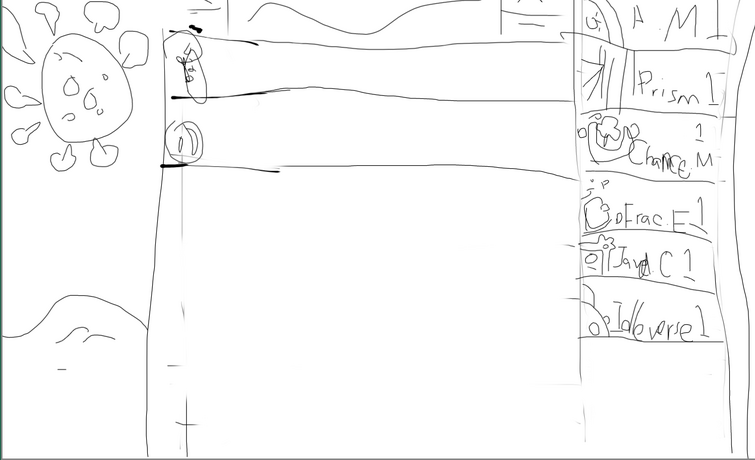 Where can I get all the sprites for cookie clicker? (not moving ones, just the base sprites for everything) I don't exactly NEED a spritesheet, but I would reccomend it.

Here are two images of my progress in Cookie Clicker! (I have been playing for 5 days) 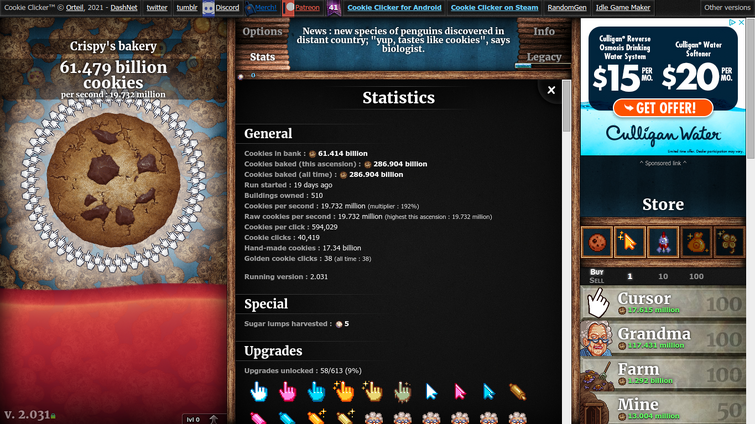 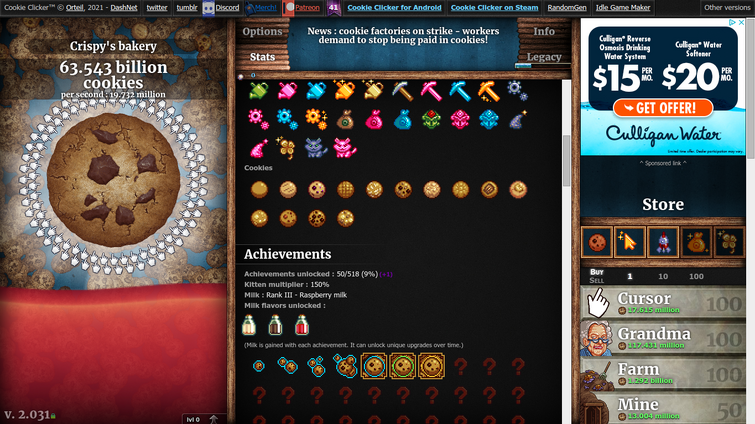 I'm so proud of myself 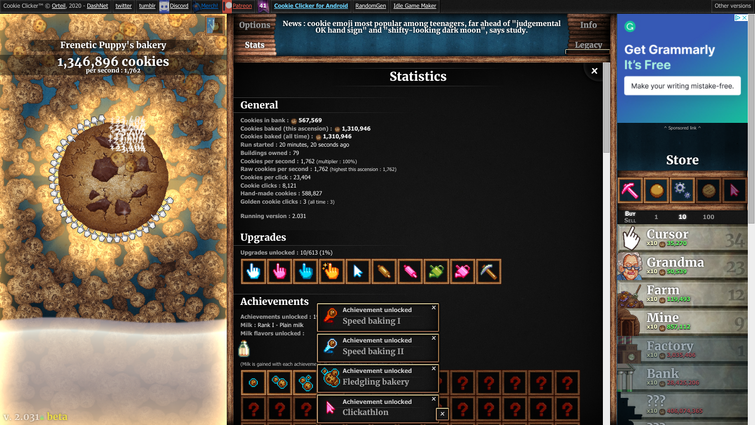 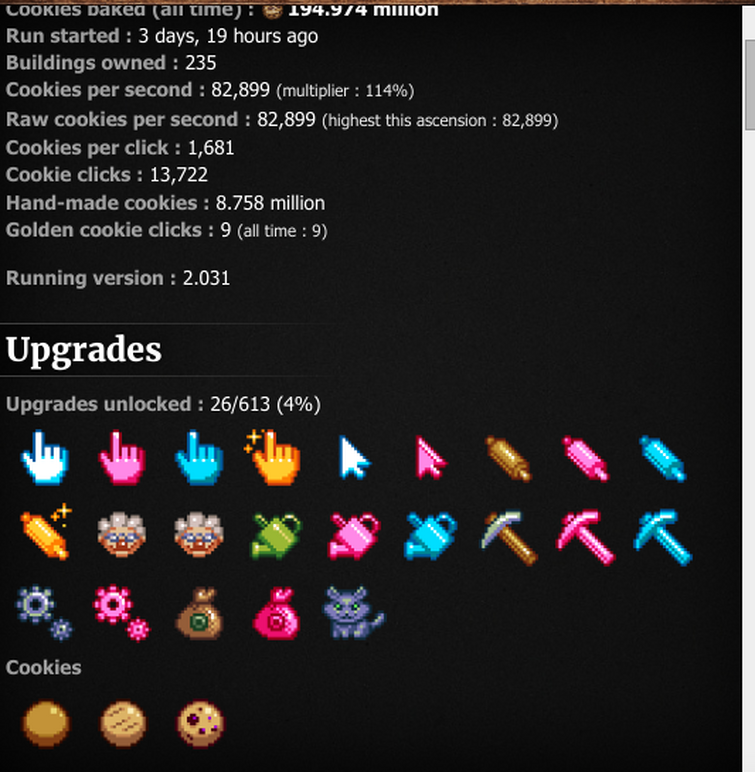 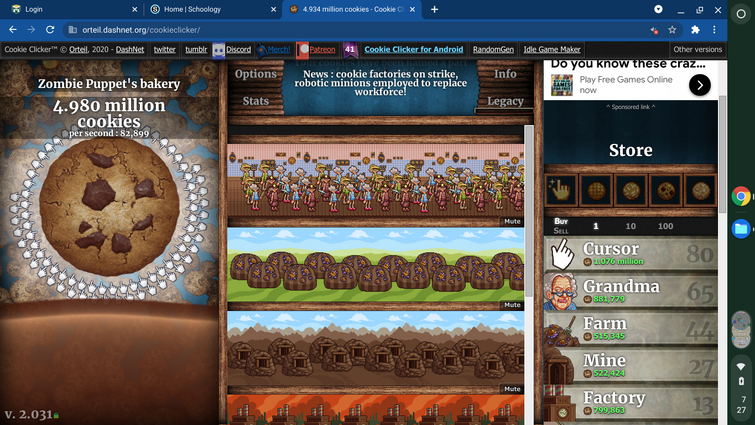 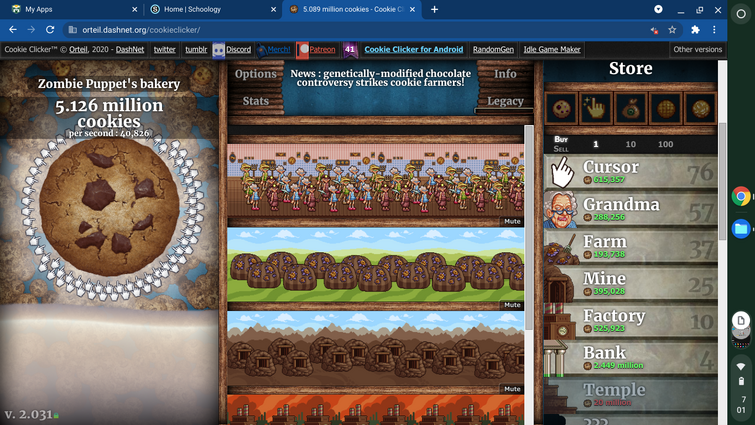 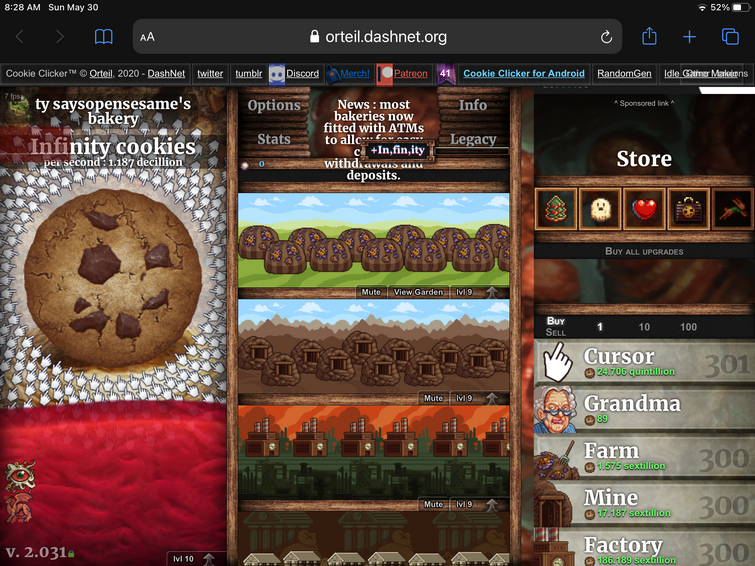 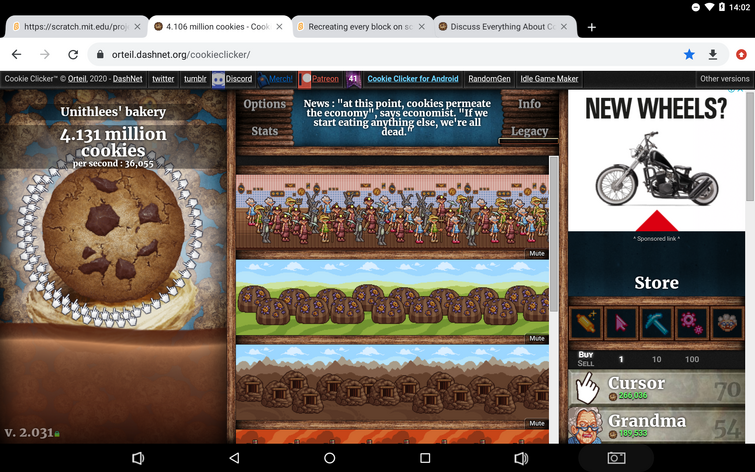