watch 04:21
Wiki Targeted (Games)
Do you like this video?
Play Sound

The Garden is a minigame initially added on March 31, 2018, in beta version 2.0053. Its implementation into live version 2.01 occurred on April 18, 2018. In the Garden, plants and fungi can be grown and crossbred, obtaining new species as a result. Crops provide various benefits depending on the species, some granting passive buffs as they sit planted in the Garden, while others give rewards when harvested. The Garden can be unlocked by upgrading Farms to level 1 using a Sugar Lump.

Ascending will not reset the unlocked seed types, but it will clear the garden of any crops. The Garden has its own equivalent of ascension, which removes all planted crops and seeds except the starter seed of Baker's Wheat, in exchange for 10 sugar lumps.

The Garden's size starts out as a 2×2 grid, and can be expanded by further upgrading Farms with sugar lumps. The maximum size of 6×6 is unlocked at level 9.

As you can see, cost efficiency starts to drop slightly at garden levels 5 and 6 before rising sharply at levels 7 & above.

Plants and fungi can be planted in the garden by clicking on the seed you would like to plant on the left-hand side and then clicking on an empty tile in the Garden. A seed can be easily planted more than once by shift-clicking to plant. At each tick, the game will check three things in order for each tile: age, contamination, and mutation. The length of one tick is determined by the type of soil which is currently in use, though a tick can be triggered instantly by spending a sugar lump.

While growing, the crop ages every tick by its aging value, which in most cases is a randomized number. As the age increases, the crops will grow as bud, sprout, bloom and finally mature after reaching their mature age. The premature stages of growth increase as the crop reaches 1/3 and 2/3 of its mature age. The power of passive effects increases with each growth stage, reaching full strength once the crop matures. The effectiveness of premature growth stages is as follows: 10% for buds, 25% for sprouts, and 50% for blooms. A crop will decay once its age reaches 100 unless it is immortal.

At the beginning the Garden only has one seed available: Baker's Wheat. By leaving the Garden plots empty, Meddleweed may also start appearing. These two plants are the most fundamental species of the Garden; Baker's Wheat is the basis for all other plants, while Meddleweed is the basis of fungi. Most new species appear as a mutation of two or more parent crops adjacent to an empty plot, but the two fundamental species of fungi first appear randomly as a result of manually harvesting Meddleweed. Using the Harvest-All tool will cause any resulting Crumbspore and Brown Mold buds to be harvested along with everything else, but harvesting crops before they mature just kills them without adding their seeds to your collection. However, using Ctrl+Shift+Click on a plant does work, since it only harvests mature instances of plants, rather than the entire garden.

If there is an empty plot, it has a chance to start growing a plant based on the adjacent (orthogonal and diagonal) plots. For example, if there are two adjacent Baker's Wheat, the empty plot may produce another Baker's Wheat or its mutations: a Thumbcorn or a Bakeberry, in the order of greatest chance to lowest chance. The exact probability can be calculated from random list mechanism. In general, the actual number is close, but not equal, to the base chance and can be approximately tripled. Most mutations require mature crops to trigger, but there are some exceptions. Additionally, certain mutations may also be prevented by having too many of a certain species adjacent to a slot (e.g. Ordinary Clover). See the species section below for a complete list of all mutation conditions. 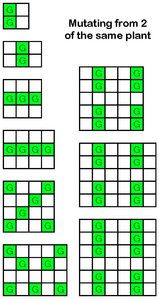 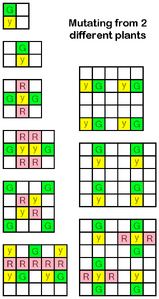 The above picture to the left shows examples of optimal plant alignments for each Garden level when trying to mutate a new crop from 2 parents of the same species (example: Thumbcorn from 2 Baker's Wheats). Green squares (labeled with a "G") indicate planted crops. Empty squares indicate locations for potential mutations.

The second picture shows examples of optimal alignments for each Garden level for mutations from 2 different parents (example: Cronerice from Baker's Wheat and Thumbcorn). The green and yellow squares (labeled with a "G" and "Y" respectively) indicate the 2 types of planted tiles. The light red squares (labelled with an "R") indicate plots that could grow unwanted crops resulting from the mutation of 2 plants of the same type. For example, growing Baker's Wheat and Gildmillet may spawn unwanted Thumbcorns in the R plots.

Note that there are certain plants which require more than just 2 adjacent plants (Juicy Queenbeet, Shriekbulb & Everdaisy). If you're trying to grow either one of these plants, DO NOT FOLLOW the mutation setups shown above (they won't work very well, if at all).

For the second chart, level 6 can be altered to remove its unwanted plots by using the setup for level 7 without the empty top row. However, this uses up one more space in the grid, meaning there is one less space for a new plant to grow. This is optimal if you are not actively managing your Garden to remove unneeded or unwanted plants.

Meddleweed, Crumbspore, and Doughshroom are able to contaminate other crops in an orthogonal direction when they are mature. The chance of this happening is very low. When it does occur, the contaminated plant is replaced by the attacking weed or fungus. Immortal plants are immune to contamination, as are certain other species. See the growth charts for an overview of contamination values and immunity information.

As of version 2.029, there are 5 soil types in the game, available depending on the number of farms purchased. These can be activated without cost and are active for all plants in the garden, though only one can be active at a time. Immediately after changing the soil type, it cannot be changed for the next 10 minutes, unless a sugar lump is spent to reset the timer. Each soil type influences the tick speed, and most have secondary effects on weed growth, passive plant effectiveness, plant spread and mutation, and auto-harvesting.

Currently, there are four tools in the minigame. Sacrifice Garden is only unlocked when all seeds have been discovered.

As your game progresses and your CpS gets larger and larger, the price of planting a seed also rises, since it is directly linked to your CpS. Unlike dollars ($) in Stock Market, where the price of a dollar is based on your raw CpS, the prices of Garden plant seeds are affected by active buffs, debuffs and wrinklers. The best way to minimize the cost of planting a seed is to wait for a Cursed Finger debuff, where your CpS drops to 0. This way only the base price for each seed has to be paid, which is usually significantly lower than the price during no debuffs. Less effective (but still useful) methods are planting seeds during Building special debuff or a Clot debuff. Having 12 wrinklers active also lowers your CpS and therefore lowers the price of your plant seeds.

Bakeberry is one of, if not the greatest plant in the game. Filling up an entire field with bakeberries gives a +36% CpS bonus. Harvesting all the bakeberries in a full garden gives a massive 18 hours of CpS (capped at 108% of your bank when you use the harvest all tool). It is also affected by golden cookie effects; harvesting bakeberries during a frenzy yields 3 hours and 30 minutes for each bakeberry, which means a full harvest yields an amazing 5 1/4 days worth of CpS. It is also recommended to plant during a Clot and/or while minimizing unwithered CpS, as the planting cost will be lowered and you will further maximize your cookie gain. The downside of bakeberries is that they have a cap of only 3% of your bank, so harvesting them with the harvest all tool only yields ~100% of your bank, thus it is best to only harvest bakeberries when you have a large amount of cookies in your bank and have a lot of Golden Cookie effects running. While duketaters yield 2 hours and could be considered better than bakeberries, duketaters do not provide a CpS bonus.

Filling up an entire 6x6 field with Golden Clovers and using clay soil provides a 135% increase in Golden Cookie frequency when all plants are mature. This can lead to a Frenzy lasting for many minutes on end, because a new Frenzy cookie will likely appear before the existing Frenzy has ended, adding on to the amount of time remaining in the Frenzy, and they can keep adding up. The increased Golden Cookie frequency also increases the chance of having a Frenzy at the same time as a Building Special, and if you cast the Force the Hand of Fate spell when both of those are active, there is a possibility of getting a x777 Click Frenzy, collectively causing a huge increase in cookies. If you also have Godzamok placed in the Diamond slot in the Temple Pantheon, you can then quickly sell all of one building (for example, Cursors) and then repeatedly click the Big Cookie and get an even bigger boost.

Nursetulips are very effective when the goal isn't to increase the CpS (since Nursetulips provide negative CpS bonus), but to increase the effectiveness of other types of plants, for example Wrinklegills (to enhance Wrinkler spawn rate) or Golden Clovers (to enhance Golden Cookie spawn rate). Assuming full 6x6 garden, the most effective way of using Nursetulips is to plant full rows of Nursetulips alternating with full rows of the desired plant. This will have better effect than having 36 plants of the desired type, at the cost of a slight negative CpS bonus.

Retrieved from "https://cookieclicker.fandom.com/wiki/Garden?oldid=156482"
Community content is available under CC-BY-SA unless otherwise noted.