The Grimoire is a minigame added on July 15, 2017, Version 2.0034. It is unlocked by spending one sugar lump to upgrade Wizard Towers to level 1.

It has several spells that can be cast:

Each spell costs magic to use. Your maximum amount of magic varies depending on your amount of wizard towers, as well as their building level. Magic refills over time; the lower your magic meter, the slower it refills. Alternatively, up to 100 can be refilled instantly by using a sugar lump.

Selling wizard towers will reduce the maximum limit of the magic meter, but not the current magic (unless the new maximum limit is below the current magic). This allows casting Force the Hand of Fate once, then selling wizard towers to reduce the cost of a second cast. For instance, at 100 magic / 100 max magic, the first Force spell would cost 70 magic, leaving 30 magic available. Selling towers to reduce the maximum magic to 30 will make the cost of a second Force spell to go down to 28 magic, effectively allowing a double cast without the use of a sugar lump. This exploit can be used for an easier and less expensive way to get the Four-leaf cookie shadow achievement.

As of version v2.0042, the seed used to determine the outcome of casting a spell is stored in your save file. More specifically, the result of casting any spell is based on your game seed (this is changed only on ascension) and your total number of spells cast. This means that if you save the game, cast a spell, re-load the game, and cast the same spell, the outcome will be the same. However, because Force the Hand of Fate uses Golden Cookie mechanics, there may be extra randomness checks before determining the specific bonus from the cookie and each additional check may change the outcome of the spell. These checks occur after determining whether the spell backfires so they have no effect on whether or not the spell backfires, they do however affect the outcome of Wrath Cookies spawned by backfires in the same way.

This means that depending on your settings the cookie from the spell may have 2 different results. Note however that the result is still deterministic so casting with the same number of spells cast total, same season and same golden cookie sound setting will always yield the same result. This gives the player the opportunity to get different results without having to cast additional spells, provided that the player has unlocked Golden cookie alert sound and/or Season switcher Heavenly upgrades.

Since the result is deterministic you can check in advance to see whether a spell will have a favorable outcome, and then use that spell at a later time with predictable results. One application of this is using Force the Hand of Fate to confirm either a Click Frenzy or Elder Frenzy cookie will be generated and use that during a Frenzy, Building Special, and/or Dragonflight buff (note: Click Frenzy cannot be summoned during a Dragonflight).

Also, whether a spell will backfire or not is also deterministic, not tied to each specific spell (note, however, that because Force the Hand of Fate has an additional chance to fail depending on the number of golden cookies on screen, the spell may fail even though other spells would not). This can be manipulated so that the backfire can be "wasted" on a spell that won't have as much of an impact, such as using it on Diminish Ineptitude to make it cause backfires to occur 5 times more likely for 10 minutes, and then not use spells during those 10 minutes, or use it on Stretch Time when a buff is about to expire for a negligible loss of buff time, or even take advantage of it to shorten a negative buff like Clot.

Gambler's Fever Dream plus random spell only counts as 1 spell cast, but it still counts if magic is refunded.

Building quantity achievements will remain locked when the player reaches a certain threshold using Spontaneous Edifice. Simply save and refresh the game to have them unlocked.

The total number of Wizard towers needed to cast the Spontaneous Edifice spell at each building level (up to 50) is as follows:

An optimal strategy for using the "Conjure Baked Goods" spell would be to wait until you have a large production multiplier. A good time to cast it is when the golden cookie effect "Frenzy" and the wrath cookie effect "Elder frenzy" are both active, as this will earn you 30 minutes of x4662 your cookie production. It is also possible to gain even larger multipliers, for example with the help of Force the Hand of Fate. (It is limited to 15% of the current bank so plan accordingly.)

Force the Hand of Fate

Force the Hand of Fate has no unavoidable risk except losing the magic points. A backfire creates a Wrath Cookie, but you do not have to click that cookie.

One strong strategy is to use Force the Hand of Fate when Frenzy or another CpS buff is in effect. A multiplier effect (such as Click Frenzy over Frenzy) can lead to a massive win in some cases, and there is no (unavoidable) bad result. This does mean one needs to keep the magic recharged, to have it available when a spontaneously-created Golden Cookie results in a Frenzy.

Outcome of Force the Hand of Fate

The mechanism of this spell follows a random list mechanism.

In the following, we assume at least one building's number is more or equal to 10.

The final results are:

The final result is:

The maximum magic, M, one can have is determined by the following formula:

Where T is the amount of wizard towers owned and L is the level of the wizard towers. How the magic, M, increases over time, starting from empty at t=0, can be approximated by the following formula:

Where time, t, is in minutes. Notice that when L=1 and T<=530, M=100. In most cases, we can approximate M with the quadratic equation only. To estimate how long it takes in minutes to reach the target amount of magic, use the following formula:

Where mi is the current amount of magic available and mf is the desired amount of magic. This time may vary from the actual time taken due to the game running at different frame rates (e.g. when running in the background versus in the foreground). By these calculations, it takes roughly 56 minutes to fully recharge a completely empty magic meter when M=100.

This Desmos graph can be used to calculate the time it will take to reach any amount of magic (m(t)), given the number and level of towers.

Spells can be repeatedly cast as long as there is enough magic in the magic meter to cast it. For every spell, there is an optimal value for the max limit of magic, which allows the magic to regenerate in the shortest amount of time. These values and times are recorded in the table below. Some spells have inconveniently low limits, like the 7 of Conjure Baked Goods, so good alternatives have been listed as well. 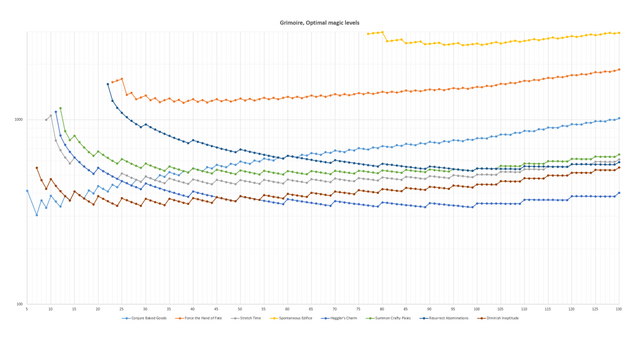 With this information, we can see that casting Haggler's Charm with 99 max magic is the fastest way to cast spells, but casting Conjure Baked Goods with low max magic is a good alternative while remaining useful in getting cookies.

Dualcasting with Force the Hand of Fate

Dualcasting is the act of casting a spell, usually Force the Hand of Fate, then selling a certain amount of Wizard Towers to cast the spell again with the mana you have remaining. This does use up almost all of your mana at once, and therefor requires a large time to recharge and use again, so minimizing the recharge time of this ability is key to using this strategy effectively. Below is a table detailing the optimal spots to Dualcast for the Wizard Tower Levels 1-5, and whether you have Krumblor's Supreme Intellect ability active. What defines whether a spot is 'Optimal' to Dualcast from is simply whether you can sell Towers quickly in groups of 100 to get from the first cast spot to the second.

This table displays the Tower amounts that when used to dualcast, would recharge in the smallest amount of time, as well as a different value if the original didn't have any optimal positions, and how much longer it would take to recharge than to dualcast optimally.

This desmos graph can be used to find all of these values, and although it can look scary at first, instructions are included on how to manipulate it, and how to find the values in this graph and more efficient times for specific situations.